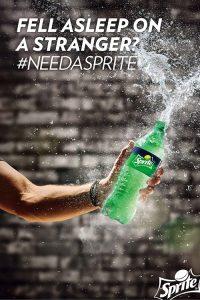 In a first for the company, Sprite has developed 360° video content that it says brings to life an integrated virtual-reality (VR) refreshment experience. The video shows a situation in which a consumer needs to ‘cut through the heat’ before asking the audience to take over. This transforms into an experience controlled by viewers where they are transported into Sprite’s VR world.

Additionally, Sprite has worked with Google to tap into innovative products, such as Google Preferred and Vogon, with the aim of creating a bank of engaging and shareable content. Utilising Google Vogon’s five-second pre-roll format and interchangeable creative platform, Sprite will have produced hundreds of snackable edits of their online video content by the campaign’s conclusion.

Social media content producer and influencer Jackson O’Doherty has also been engaged to help connect with Sprite’s audience by launching the ‘Awkward Escapes’ series, which will be featured in Sprite videos across owned social platforms. The social influencer content will be backed up by native partnerships with Buzzfeed, Pedestrian and Junkee.

The campaign targets young adults aged 16-29 and plays up the fun and refreshing nature of the brand, helping young adults ‘cut through the heat’ in awkward situations by enabling them to maintain their cool with a Sprite.