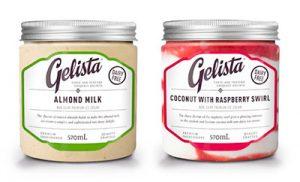 The addition of the new flavours balances and expands the existing range of six to eight flavours – from five dairy and one non-dairy option to five and three, respectively.

“We don’t follow fads or develop gimmick flavours,” he said. “We research emerging trends in the premium gourmet market and develop flavour profiles that are clean, authentic and exceptional.”

Almond Milk Gelista is promoted as having a sweet and subtle almond flavour that is neutral enough for it to become an accompaniment to gourmet deserts: the new non-dairy substitute for traditional vanilla bean ice-cream and gelati.

Coconut with Raspberry Swirl Gelista is described as building on the huge success of the plain coconut product included in the range originally launched last year. Gelista says the new product “delights the senses with the creamy texture of the existing coconut plus the sweet aroma of the raspberry, the aesthetically beautiful red swirl in the pure white, and a flavour that seduces”.