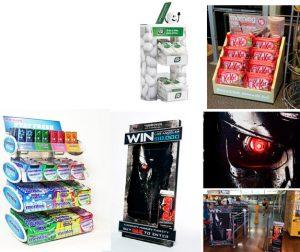 The industry’s ‘best of the best’ were honoured at the 2016 POPAI Marketing at Retail Awards, announced on September15.

“The retail environment is changing at breakneck speed, with the integration of new technologies, and the industry is rising to the shopper sophistication challenge,” she said.

“The breadth and scope of the record number of entries this year demonstrate that shopper marketing and experience is being wholeheartedly embraced by both brands and retailers.”

Parmalat took out silver in the Temporary Display category, for its Terminator campaign for the Oak brand, created by Active Display Group.

Nestlé took out several awards in the overall competition, including bronze for a Kit-Kat impulse activation in convenience, developed by Pop Star and Ergo Asia.

Stuart Alexander also scored bronze for a display centred on the Mentos suite of products, from ID POP.

A full list of the winners across all 25 categories, encompassing physical store, POP campaigns and shopper experience programs – including integrated campaigns and digital technologies – will appear in the next edition of Convenience World.

All winning case studies and entries can be found in the online case study gallery here.