Sunbites launches Grain Waves Plus ‘made with real vegetables’ 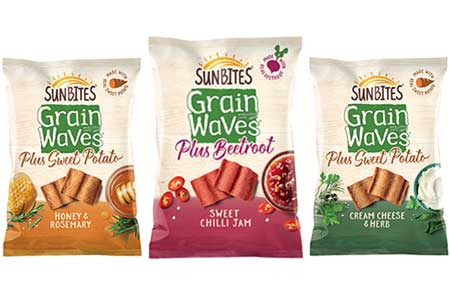 After a busy year, Sunbites is now launching Sunbites Grain Waves Plus, made with Australian wholegrain corn, wheat and oats, with added vegetables – beetroot or sweet potato.

Sunbites Marketing Manager Susan Press said: “We’re really excited to introduce Sunbites Grain Waves Plus – it’s a world first for PepsiCo, and the addition of vegetables to the wholegrain base creates a differentiated product in the snacks aisle in both appearance and taste that we know people are going to love.

“A bowl of Sunbites Grain Waves Plus with Vegetables is the perfect no-fuss party snack for the summer entertaining season. Made with no artificial colours or flavours, Grain Waves Plus is a wholegrain snack you can feel good about eating, and they taste delicious too.”

From October 9, Sunbites Grain Waves Plus will be hitting the shelves in Woolworths, Coles and independent retailers, available in 180g and 80g pack sizes. The 80g pack will also be available in petrol and convenience stores nationally.