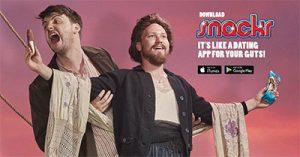 Digital agency Deepend and Peters Ice Cream have launched a cross-channel campaign for Maxibon, including an app to encourage ‘Maxibonding’ between friends.

The campaign starts from early April and consists of nationwide outdoor creative, unique digital assets including a tailored Snapchat lens, and a bespoke app.

“Maxibon has long been recognised as a catalyst for bringing mates together,” Peters Ice Cream Head of Marketing Alicia Munday said.

“This creative not only resonates well with our core fans, but the clever app design takes customer participation to a new level by actively driving fans together and enabling easier purchase by highlighting the nearest outlet offering the best Maxibon two-for-one deal and turning users into legends.”