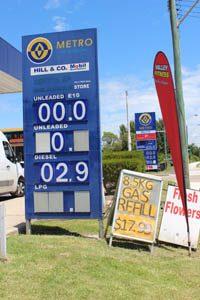 From midday until 2pm on February 3, drivers could claim a hefty $1 per litre discount (up to 50lt) on fuel from Metro Petroleum St Mary’s by showing they had downloaded the reward platform’s app to their smartphone. The discount resulted in free unleaded and unleaded E10 fuel and 2.9¢ a litre diesel.

The deal, unsurprisingly, was very popular, with a queue trailing more than 500m from the site minutes after the launch began. Within half an hour, police arrived to help manage traffic along the Great Western Highway.

More than 10,000 litres of fuel across all fuel types was claimed during the promotion.

The scene mirrored the Canberra launch of Go2 Rewards a week earlier, where heavily discounted fuel was available at Metro Petroleum Fyshwick.

A spokesperson said Metro sites were chosen for the Sydney and Canberra launches because Go2 Rewards found the group easy to deal with and customers perceived the brand as offering value.

Go2 Rewards is being marketed as a “revolutionary” approach to both cheaper fuel and consumer loyalty. Launched on the Gold Coast in 2014, the program invites members to earn discounts by using the app and shopping online or in-store at partner retailers.

After shopping at a Go2 Rewards partner, members are able to enter their receipt details, snap a photo of the receipt for proof, and earn specific fuel rewards from that spend. They can buy fuel at any service station and have the accumulated value off each litre of fuel (up to $1 per litre, up to 50lt) paid into their bank account within 72 hours. These fuel rewards can even be redeemed on top of other loyalty offers, such as those from Coles and Woolworths.

Go2 also offers a suite of benefits to its members and Go2 partner businesses and encourages the community to work together to ‘Adopt-a-Servo’ and help each other find the cheapest, most up-to-date fuel prices available locally by posting photos of price boards. If a member updates 30 prices or more in a month, he or she goes into the draw to win a $2,500 Flight Centre voucher.

The spokesperson said the main purpose of the attention-grabbing launch was to illustrate what’s possible daily with the Go2 Rewards app.

“Consumers can earn these discounts on a daily basis just from their shopping, which can make a huge difference to the lives of everyday Australians,” the spokesperson said. “There’s tremendous excitement about the possibilities, not only for consumers, but also retailers, as this app offers an opportunity for small to medium businesses to offer competitive loyalty rewards to the consumers.”