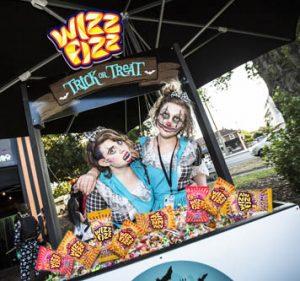 Celebrating its fourth year, the annual Spooktober Halloween Festival kicks off on October 28 at St Kilda Town Hall in Melbourne with Wizz Fizz as the event’s presenting partner.

Running across four days, the festival is billed as offering amusements and entertainment for the whole family, including two haunted houses, an inflatable Spooky Mansion Slide, games, face-painting, ‘cackling cupcakes’ and cookie-decoration workshops.

Organisers say there really is something for everyone this year – including the family-friendly Haunted Manor and “the ultimate thrill in horror and suspense” at the “abandoned halls of the mental Asylum”.

“Spooktober has gone from strength to strength every year and is now the biggest of it’s kind anywhere in Melbourne,” Spooktober organiser Dale Pope said. “Wizz Fizz has been a supporter of Spooktober since its inaugural year in 2013 and is the ideal presenting partner to take Spooktober to the next level.”

Wizz Fizz National Sales and Marketing Manager Ben Gibbs said: “We’re excited to be involved with Spooktober again this year, bringing the festival to a new level of spooky fun. Wizz Fizz has long been part of Australia’s history, particularly for trick-or-treaters across the country. We can assure you, guests are truly in for a ‘treat’ this year with Spooktober shaping up to be bigger and better than ever before.”