Matt Whittaker says the focus of Whittaker’s Artisan Collection is on local provenance and quality.

“Hazelz share our commitment to quality and there is something truly special about Canterbury hazelnuts – they simply can’t be beaten on taste – and they pair perfectly with decadent Whittaker’s Creamy Milk Chocolate,” says Matt.

Holly Whittaker says, “We think they’ll love the delicate nutty flavour and the perfect blend of smooth and indulgent hazelnut paste alongside a light crunch, plus the fact that they’re supporting local producers.”

Sourcing from Canterbury also marks a special return to its roots for the Whittaker family. The company’s founder and Matt & Holly’s great grandfather, J. H. Whittaker, first sold his confectionery out of his Addington, Christchurch home in 1896.

“Like all Whittaker’s chocolate, the Canterbury Hazelnut in Creamy Milk Chocolate block is made from beans-to-bar at Whittaker’s one factory in Porirua. It is a permanent addition to Whittaker’s Artisan Collection, alongside Whittaker’s 45% cocoa Rich Cocoa Creamy Milk block released earlier this month.

“Whittaker’s Canterbury Hazelnut block is Rainforest Alliance Certified, as is Whittaker’s entire range of 116 products that are crafted with Ghanaian cocoa beans.”

The Whittaker’s Canterbury Hazelnut in Creamy Milk Chocolate 100g block is available now in store and online at supermarkets and other retailers nationally. 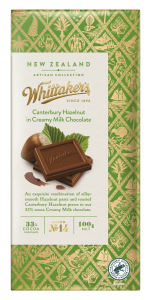 Coles supermarkets and Coles Express sites across the Northern Territory and selected regional stores in Western Australia are “painting the town purple” this NAIDOC...