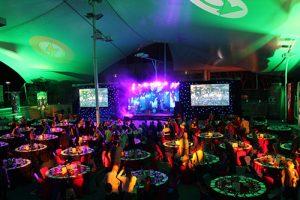 Mr Park, reviewing the previous year, also emphasised the company’s obligation to its ‘inches’ mantra when striving for excellence.

“It’s the little things that make the biggest difference,” he said in his speech, which opened the event’s business sessions on Wednesday.

The conference, at the RACV Royal Pines Resort, was held over three days, beginning on Monday with a members’ welcome dinner.

On Tuesday, members joined in a range of activities, including  go-karting and a winery tour, before being treated to a poolside dinner and a fireworks display.

After the business sessions, the trade show featured prominent displays from manufacturers and the UCB café concept in action, as well as showcasing ‘Mountain Dew Kickstart’, UCB’s flagship product feature for the event.

A ‘Heroes and Villains’ themed gala dinner followed on Wednesday evening, during which the group’s annual awards were presented.

The UCB national conference will be covered extensively in the December issue of Convenience World magazine.