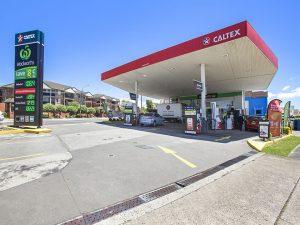 The sale of a Caltex service station in Miranda and two neighbouring properties is expected to fetch about $8 million and give a yield of about six per cent.

The Caltex service station at 455 Kingsway comes with the security of a 15-year lease to Woolworths Limited, which was recently renewed for a further five years with options through to 2032.

The site area is 860sqm and the lease is structured with yearly rental increases, making it a prime investment candidate.

Two neighbouring properties – a three-storey workshop on a 550sqm site and a residential building with two street frontages on a 670sqm site – are also available.

Laing+Simmons Randwick Principal Alex Udler says buyers can secure the three properties and amalgamate a 2,080sqm site in one of the most high-profile positions in Miranda, on major roadways with more than 40,000 cars passing each day. But it’s the live-in, development and even business-ownership options that will broaden the properties’ appeal.

“The rarity of three properties becoming available in one line, combined with the prime position of the site, makes it a compelling proposition for developers, private investors, syndicates and even oil companies,” Mr Udler said.

“The long-term service-station lease to a blue-chip tenant underlines the investment potential, while the expansive site presents an array of future development alternatives.”