NightOwl puts the freeze on competition 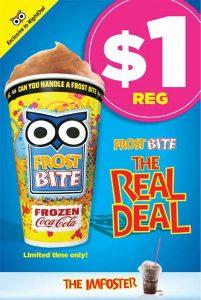 NightOwl has come out of roosting and spread its wings with a multifaceted frozen beverage offering thanks to a historic partnership with Coca-Cola.

NightOwl launched The Real Deal on February 29, ensuring great value for money as well as fresh and exciting new flavours.

All NightOwl stores now feature a Fun Wall serving Frostbite in a range of sizes that it says rival the competition. The new Frostbite now includes Bubblegum, Coke and Raspberry, as well as new seasonal flavours Pineapple and Blue Lemonade.

“We’re really excited with how The Real Deal has been received by customers so far and we can’t wait to introduce fresh new flavours in the coming months,” NightOwl CEO Craig Urquhart said.

“We hope that by introducing this new Frostbite deal, both customers and franchise owners will see the benefit in being part of the NightOwl family. The NightOwl brand prides itself on providing quality products at affordable prices, and The Real Deal is our next step in ensuring that.”

NightOwl Convenience is a modern Australian success story. After starting with just one store in Auchenflower, Brisbane, NightOwl is now the largest standalone convenience brand in Australia.