NightOwl gives away more than 30,000 prizes 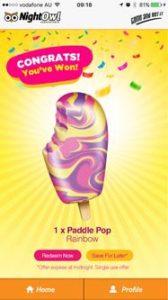 A positive response to the convenience store chain’s Scratch to Win competition has seen more than 30,000 prizes already given away this summer.

Released alongside an updated version of the NightOwl app earlier this summer, Scratch to Win is a virtual scratch card that is downloaded to customers’ phones every night. All the customer has to do is go into the competition’s tab on the app and then play the game, using their fingers to virtually scratch the card.

Customers can win either an instant prize that they can redeem in any NightOwl store that day, or an entry into the second chance draw – where one person will win a van full of summer essentials, including a Rockstar surfboard, UrbanEars headphones and eight tickets to see Twenty-Pilots plus heaps of free products.

“We have been taken aback by the overwhelmingly positive response we have received,” NightOwl CEO Craig Urquhart said. “We want to make sure that nobody misses out. There is absolutely no catch; we really are giving away hundreds of prizes every day – for free!”

The Scratch to Win competition will finish on December 11. The new NightOwl app is available in both the App Store and Google Play store.

Australian retail turnover rose 0.9% in May, reaching another record level, according to the Retail Trade figures released by the Australian Bureau of Statistics...

Bulla Family Dairy is giving movie-goers another reason to return to the cinemas with the launch of its Murray St Choc Top range. After 20...
Advertisment