New functional beverage to perk up the market 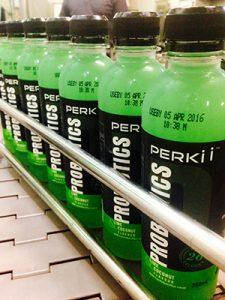 Developed by scientists at the University of Queensland (UQ), the PERKii functional beverage delivers one billion live and protected probiotics in an 85-per-cent-water-based drink.

PERKii says the drink contains natural flavours, only 26 calories and just one and a half teaspoons of sugar from apples. The drink also utilises the patented and world-first technology Progel, developed by UQ Scientist Bhesh Bhandari, to ensure the delivery of live probiotics to the digestive system.

Since September 2015, PERKii CEO Randy Milne, a former national business manager at Coca-Cola Amatil, has been guiding the drink through a trial period in a number of outlets around Brisbane and the Sunshine Coast.

“During this trial period, PERKii has received a lot of positive feedback from outlets and customers looking for a delicious, low-calorie, lactose-free probiotic drink that targets the digestive system,” he said.

PERKii has attracted national attention and was invited to participate in the Wstart program by Woolworths in recognition of its product innovation. Along with a growing list of national stockists, PERKii is now available nationally from Caltex Woolworths and convenience sites, and Woolworths at Bondi and Surry Hills in Sydney.

Tribe Breweries is promoted as one of Australia’s largest independent brewers. It claims to be home to the largest number of independent craft beers...