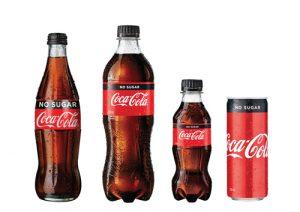 Coca-Cola No Sugar – created after more than five years of research, recipe mixing and flavour trials – will become a new permanent member of the Coca-Cola family.

The drink has been designed to taste as similar to the original Coca-Cola Classic as possible. According to President of Coca-Cola in Australia Roberto Mercadé, Coca-Cola No Sugar marks the latest step in the evolution of sugar-free Coca-Cola recipes that began with Diet Coke in 1982 and continued with Coke Zero in 2006.

“People are looking for a better balance in their diet and lifestyle, which is why we are changing the way we do things here at Coca-Cola,” he said.

“Coca-Cola No Sugar will be a great new choice for those who love the taste of Coke, but are watching their sugar intake.

“This is about The Coca-Cola Company making the leap from simply offering people more choice to actively encouraging people to consider a ‘no sugar’ option.”

Coca-Cola No Sugar will be on shelves from today. The Australian and New Zealand launch follows its debut in Mexico last year where, Coca-Cola says, the consumer response has been overwhelmingly positive.

The local launch will be backed by the brand’s biggest investment in a new product launch since 2006, with the integrated marketing campaign encouraging Australians to ‘Say YES to the Taste You Love’ by trying Coca-Cola No Sugar.

More than two million free samples of Coca-Cola No Sugar will be given away over two months. Consumers will be able to get free samples in more places and via more methods than ever before, including downloading vouchers on their mobiles, via Shazam during TV ads, and even at voice-activated outdoor advertising panels.

The sampling campaign will also feature a new interactive outdoor advertising panel, featuring a LED screen where consumers can verbally “Say YES” to redeem a free sample vended directly from the refrigerated panel. The voice-activated panel will be deployed at selected high-footfall CBD locations.