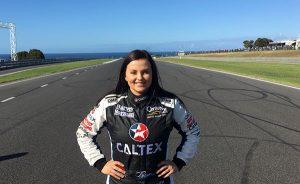 The Australian fuel retailer has confirmed it will continue as naming-rights backer of the 22-year-old’s Dunlop Super2 Championship entry.

Fielded by Image Racing, third-year V8 Supercar driver Ms Gracie will contest the newly named championship in an ex-GRM-built ‘car of the future’-specification VF Commodore, driven to eighth place in 2016 by debutant Richard Muscat, and will line up alongside recent signing Jack Perkins in identical ex-GRM chassis.

“Renee is an exciting, runaway, motorsport talent, and we’re looking forward to being trackside with her throughout 2017,” he said.

“She has been a brilliant brand ambassador for Caltex over the past year. Her dedication and passion for the sport – particularly as one of the few professional female drivers to be involved in Australian motorsport – has been unwavering, and we wish her the very best for the upcoming season.”

The opening round of the Dunlop Super2 Championship will take place at the Adelaide Parklands Circuit over the weekend of March 2-5.