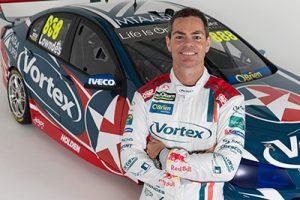 Triple V8 Supercar champion Craig Lowndes has unveiled the new TeamVortex livery ahead of its debut in the 2016 V8 Supercars Championship.

The formation of TeamVortex is an extension of the partnership between the star driver, Caltex Australia and the team at Triple Eight Race Engineering.

The six-time Bathurst 1000 winner and Caltex brand ambassador for almost a decade is set to take the wheel of the number 888 Holden Commodore VF, with Steven Richards joining him as co-driver for the third consecutive year.

The pair claimed a memorable win at last year’s Bathurst 1000 and between them have won the race 10 times.

“Vortex is the most popular premium-fuels brand in Australia, so we’re excited to be extending our partnership with Australia’s most successful V8 driver.”