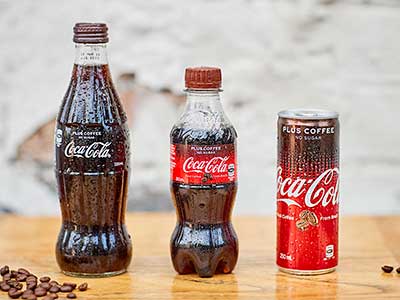 Coca-Cola Australia has launched a new flavour, Coca-Cola Plus Coffee No Sugar.

The company says Australians will be the first in the world to taste the new flavour – a limited-edition offering that will be available only over summer.

“Australians have a love affair with coffee, so we thought: why not give them more of what they want – the great taste of Coca-Cola with a dash of real coffee from Brazil?” Coca-Cola Australia spokeswoman Lisa Winn said.

Rollout of the new flavour to stores began on Wednesday (September 27).

“It’s a fresh take on the delicious taste of Coca-Cola Classic, but with the unmistakable aroma of real coffee and some subtle caramel undertones,” Ms Winn said.

“Just like the real thing, the delicious taste of Coca-Cola Plus Coffee is best served icy cold.

“And for those watching their sugar intake, the good news is that Coke Plus Coffee is completely sugar free.”

“Coke Ginger was a huge success in Australia and it was inspired by the simple insight that Australians enjoy the taste of ginger drinks,” she said. “The launch of the new Coke Plus Coffee follows a similar path to market – we know Australians love their coffee.

“So, it was a no-brainer to ask our taste experts at Coca-Cola HQ to mix up a brand-new coffee recipe and get it in the hands of Australians as quickly as possible.”

Ms Winn says that, for many Aussies, it will be a popular alternative to a second cup of coffee in the afternoon.

“If it sounds like it packs a punch, people might be surprised,” she said “Coca-Cola Plus Coffee actually has much less caffeine than the same amount of a regular latte or flat white, but a little more than Classic Coca-Cola*.”

When is an ice cream not an ice cream? When it’s a shirt, necklace or even pyjamas. Brand collaborations and licensing deals are nothing new,...

Tribe Breweries is promoted as one of Australia’s largest independent brewers. It claims to be home to the largest number of independent craft beers...
Advertisment