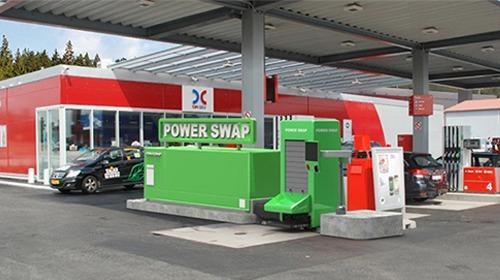 The technical concept was created with the goal of using the already well-established refuelling infrastructure: petrol stations.

“It is better if we do not have to establish a completely new infrastructure just because we want to use EVs (electric vehicles) instead of fossil fuel cars,” Powerswap founder Sten Corfitsen.

Traditional EV charging involves connecting a cord and waiting for the car to be charged. With Powerswap, the battery is replaced with the help of a robotic device in three minutes.

“By installing robotic swap units at petrol stations and parking lots, we will gain a cost-efficient solution for the transition to a dominant electric-transport sector,” he said.

Powerswap is claimed to be different from earlier battery-swap trials, which have been based on building “expensive” new swap stations. Another difference is that Powerswap handles the swap of batteries from the side, which is better when it comes to automation.

“I’m confident we have created something that will lead to faster expansion for EVs,” Mr Corfitsen said. “Taxi companies and other transportation fleets are suitable niches for our introduction because their operations have no time available for prolonged charging. We have received a Letter of Intent from Taxi Stockholm, the biggest taxi company in Sweden.”

According to Powerswap, the advantages of automatic battery swap are:

Powerswap AB is a spin-off from Fuelmatics AB, the originator of completely automatic refuelling with liquid fuels. Powerswap is supported by the Swedish Energy Agency, Energi-myndigheten, with the goal of enabling a more efficient infrastructure for electric vehicles. The company collaborates with Chinese battery manufacturers and OEMs.

We want to hear from you

Each month in Industry Snapshot we will pose a question to you, our readers, asking for your opinion on a topic. Send your thoughts to us and we’ll pick some of the best answers to be published in Convenience World.

Trends around the world point to increasing numbers of electric vehicles. What does this mean for the humble Australian petrol station?

If you have something to say, send an email with your thoughts (100 words or fewer) to yoursay@retailmedia.com.au.