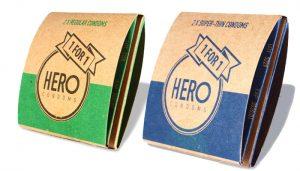 Hero CEO Dustin Leonard says the new Hero pocket pack has been designed with the P&C shopper in mind.

“If you’re running into a convenience store for a spur-of-the-moment condom purchase, a two-pack that fits in your pocket and costs less than traditional six- or 12-pack provides consumers with greater convenience and is better suited for the retail environment,” he said.

“These condoms represent a big shift in the market. Never before has a two-pack like this been sold in Australia. We’re bringing innovation to a market and creating an entirely new category of product.”

The packs, which feature two individually wrapped condoms, are claimed to have already been well received in the market, with distribution secured in hundreds of P&C stores nationwide.

Mr Leonard says the increased reach and distribution enabled by the new pocket packs will assist Hero with its continued commitment to donate two million condoms to the people of Botswana in 2016, through its one-for-one business model.

“We’re committed to providing products customers want, when and where they need them, whether they live in a remote town or major city,” he said.

“Hero’s new pocket packs offer a more convenient option for customers, that meet the needs of local communities while also having a positive social impact on a global scale.”

The packs will also be featured inside interactive vending machines across a nationwide network of airports and Westfield shopping centres. Hero is also in discussions with other major retailers.