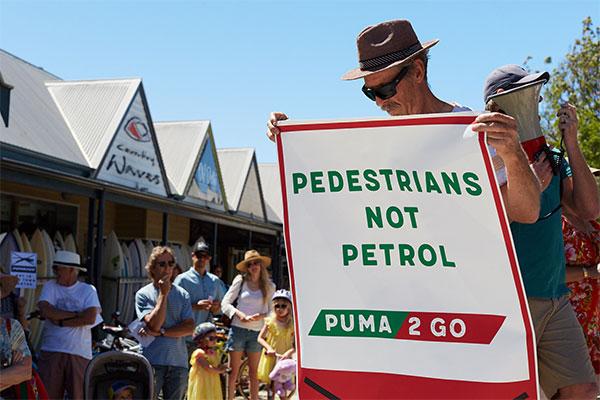 Six months after the second hearing of Western Australia’s State Administrative Tribunal (SAT) for a proposed 24-hour Puma Energy convenience store and service station to be built in the centre of Dunsborough, in WA’s Margaret River region, a decision has been handed down in favour of applicants DCSC, but for the Dunsborough community the fight is not over yet.

Puma2Go community action group spokeswoman Trish Flower says that while the decision is “incredibly disappointing”, the community will continue to assert that the companies are developing the wrong location on the corner of Dunn Bay Road and Cyrillean Way.

“Just because it’s legal doesn’t mean it’s right,” she said. “It’s so sad that a handful of local residents who are in the DCSC landowner group along with well-known Perth property and business identities would put their own profit above the clear wishes of the communit,” she said. “It’s also sad that flaws in the town-planning scheme should allow this to happen.”

The group claims to have pledges and support “from roughly half the town” to boycott the development. Ms Flower says one positive take-out from the Puma2Go campaign was a strengthening of community spirit in the town.

“Our campaign started in earnest late last year and we’ve had two fantastic community rallies, which each saw 700 to 1,000 people attend to show their support,” she said. “We’ve had thousands of signatures on petitions and pledges to boycott the Puma station if it was eventually built. We’ve presented at community forums and had wonderful support from tireless volunteers, retailers and local artists donating works to support the campaign.

“We can use this spirit to campaign to the City of Busselton (with the aim of) ensuring this mistake in town planning cannot happen again. We will be pushing for the council to provide a concrete character plan for our town centre and tighten up their planning regulations.”

The Puma2Go campaign has been focused on the chosen location of the proposed site, which the RAC WA listed in March this year as the state’s seventh riskiest regional intersection.

“This development flies in the face of road safety, public amenity, walkability and traffic flow,” Ms Flower said after the SAT announcement. “There are so many better locations it could be in, but it looks like greed has won today.”