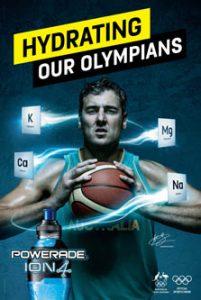 Powerade will leverage its association with the Olympic Games – having been launched at the 1992 Barcelona event – into a multi-million-dollar marketing campaign in the lead-up to Rio 2016.

Australian Olympian and 2015 NBA championship winner Andrew Bogut has been appointed as Powerade’s official Olympic Games ambassador and the face of the product’s national marketing campaign. He will feature on the packaging of the mandarin-flavoured Powerade Ion4 Rio Victory limited edition, which is available in stores nationally.

“I’m excited to be part of the Powerade Olympic Games campaign,” Mr Bogut said. “The brand has always had a close association with the Games and is synonymous with promoting the importance of hydration during sport. My kitbag will be well stocked with Powerade Ion4 throughout the Games to keep me going – hopefully all the way to the finals.”

Powerade Brand Manager Sonja McCarthy said: “Powerade has been synonymous with sporting excellence since it was launched at the Barcelona 1992 Olympic Games and it has been keeping athletes hydrated ever since. Our goal now is to inspire our athletes to perform to their best at Rio.”