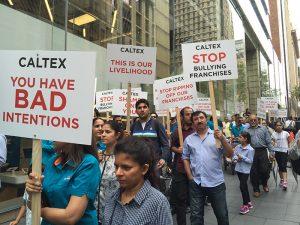 Disgruntled Caltex franchisees descended on Martin Place in Sydney on Wednesday to protest at their alleged treatment by the petrol giant.

A spokesman for the protestors says the issue has been “simmering for weeks” over allegations that some of Caltex’s 650 franchisees have been underpaying their employees.

Speaking on behalf of a large group of franchisees, the spokesman says Caltex is being heavy-handed and is trying to paint a number of its franchisees as “immoral”, “fraudulent” and “exploitative operators”.

“We’re happy to help Caltex catch any perpetrators, but they’re tarring all of us with the same brush,” he said. “The vast majority pay our employees correctly and all Caltex wants to do is brand us all as cheats.”

He says Caltex is charging each franchisee nearly $10,000 to do its audit through Ernst & Young.

“Given the amount of documents Caltex is compelling from franchisees, [we] do not consider this to be a realistic estimate of the likely costs they will be asked to pay,” he said.

The spokesman claims Caltex’s “punitive and punishing treatment” franchisees will affect the livelihoods of the families they employ in their small businesses. He says the group believes Caltex CEO Julian Segal is self-serving and is treating his franchisees with disdain.

“Mr Segal has stated that Caltex has within its franchise model ‘a safety net which provides support to franchisees so they can operate viably’,” he said. “Caltex’s profitability assistance scheme is far from a ‘safety net’. It operates in practice such that a franchisee who is running their business at a loss must plead for assistance at the mercy, and sole discretion, of Caltex. There are no set parameters for this alleged ‘safety net’ and Caltex regularly moves the goalposts by placing one hurdle after another in delaying and obstructing the franchisee from receiving assistance. The harsh effects suffered by running a business at a loss are not only felt by the franchisee, but also by their families.”

Last week, Mr Segal outlined the findings of Caltex’s franchise-model review, which he says confirmed that the model allows franchisees to draw a wage, make a profit and pay employees in accordance with lawful wage rates.

“I will not allow a franchisee to operate a Caltex Australia franchise where they do not pay their employees their full entitlement,” he wrote in The Age. “We have taken action against some of these franchisees already and we are continuing to take appropriate action to eliminate unlawful practices from our network. I am committed to ensuring the majority of our valued franchisee partners who do the right thing are not unfairly affected by the inappropriate actions of others.”

Caltex Australia continues to update the Fair Work Ombudsman on its network-wide independent workplace audits that began in 2015. It also claims to be improving its governance procedures for franchised sites. It has carried out changes to the process for approving franchisees to join its network, such as extra acceptance protocols and reference checks, and reviewing the process for consenting to the assignment of franchises.

Australian retail turnover rose 0.9% in May, reaching another record level, according to the Retail Trade figures released by the Australian Bureau of Statistics...

Bulla Family Dairy is giving movie-goers another reason to return to the cinemas with the launch of its Murray St Choc Top range. After 20...
Advertisment