2016 promises to be a year of great opportunity 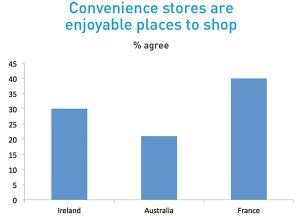 Shopper insights across multiple convenience markets allow us to benchmark how convenience stores are performing in the eyes of shoppers, and the outlook is promising for those retailers prepared to keep learning, developing and trialling.

There is no better opportunity to take stock of where you are than at the beginning or the end of a calendar year, with a review of what you want the next one or two years to look like. Shopper needs and behaviour evolve over time, so we need to ensure our businesses are aligned to customers’ wants.

But here’s the crux: if we only deliver against customer wants, are we not possibly playing it a bit safe – not quite ‘going for it’?

Everywhere I go, I see convenience stores that are outstanding, and what makes them outstanding compared with the majority is the drive, vision and dreams of those involved in the businesses.

Sure, some are willing to take a few more risks than others, but many ‘risky’ things we do in life aren’t actually that risky. They’re just different to what we’ve done in the past and, with hindsight, we can see that most decisions have been carefully considered before being executed, so, again, they’re not that risky at all.

I have just returned from a skiing holiday in France with my three young kids. I was struck by the comment of a ski instructor who said to his group: “If you’re not wiping out or falling down, you’re not trying hard enough. It’s those who fall down lots at the beginning of the week who turn out to be better skiers at the end of the week.”

Similarly, getting ahead in P&C is about taking some risks – calculated risks. Why not venture out and do something different in 2016 compared with 2015? Not all things will work, but a lot will.

Try not to fall into the belief that you know what shoppers will or won’t buy, or will or won’t do. Give them a good reason to, and they often will. Challenge some of your own myths or preconceptions and be willing to be surprised by the results. The day we stop learning, developing and trialling new things in work and in life is a dark day in our lives.

Success is also about standing out from the crowd, trying to be a bit different and a bit better than everyone else. Sometimes it’s easier to go along with the norm. It’s safe. You can follow other people, knowing that if something is working for them, it will probably work for you. It might, but it would be great to see more than a quarter of Australian shoppers saying that convenience stores are trying to be better than other stores around them.

I believe the Australian convenience industry has made great strides in recent years – and it will continue to do so – but commercial success doesn’t appear to be a case of the big companies outgunning the smaller guys, rather the quick and nimble businesses outmanoeuvring the slower ones.

Are your stores enjoyable places to shop? Only 20 per cent of shoppers polled in Australia say convenience stores are. The proportion is much higher in countries such as France. Think about the passion the French have for their food: it’s like a religion.

It never ceases to amaze me how many businesses employ really passionate people – but their passions are confined or squashed in the workplace. This is a shame and a waste of passion. Let colleagues take ownership of certain things and watch their enthusiasm for the job fly.

Shoppers all over the world seem to be saying the same thing – they find supermarkets and other large chains all too ‘much of a muchness’. They are really keen to see new and exciting initiatives introduced into convenience stores, whether in food- to-go, snacking or grocery items.

Only 25 per cent of shopper respondents in Australia believe convenience stores change their offering enough to keep stores interesting.

How will you review your ranges? Might you want to consider having a set percentage of your entire range dedicated to new and exciting products? It could be something you become known for – the store to have the newest (and wackiest?) products first?

Such a move could create real excitement in your communities and this will help footfall. What are we going to have new next month, for one month only? 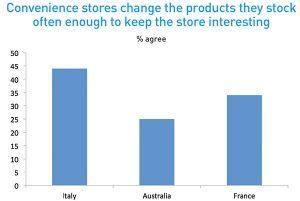 Also, how often are you retaining certain slow-moving lines when you know faster- moving ones exist?

There’s always a balance to be achieved, but these are the decisions you should consider each month.

Japan is notorious for churning the product range and for products to have much shorter life cycles in stores (nine months on average). The country also has the highest percentage of shoppers who are happy with the range of products sold in convenience stores. Shoppers move on quickly in many areas and we need to match this step by step.

Seasonal events are often a great opportunity to stand out from the crowd. The US does this particularly well.

Are you exploiting events and seasons in your stores? Only 23 per cent of shoppers interviewed in Australia think convenience stores stage events well. Maybe this is an area your store colleagues could ‘own’. Hand over the opportunity to impress with events to all of your staff. This would be a great chance for them to bond and work as a team. There could be internal competitions and commission paid on certain lines. It would add excitement to stores and increase sales. 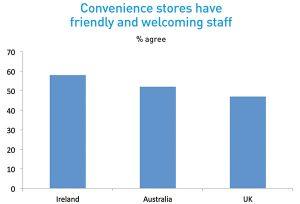 The start of a new year is often the time when many consumers think about adopting a healthier lifestyle and better eating habits. Whether this goes further than January 31 is another matter, but health improvement is certainly an area of great focus around the world.

Only about a fifth of shoppers polled in Australia and the UK think convenience stores have enough healthy food options available for purchase, and this promises to be an issue of increasing focus, and possibly government intervention, in the years ahead.

We may as well start on the healthy-agenda journey now. Shoppers definitely want indulgent treats, too, but to focus only on indulgence means we’re missing out on a large and important group of customers who are valuable, high-spending and needing ‘convenience’ as much as anyone.

One area Australia has excelled in is that of staff. Fifty-two per cent of Australian shopper respondents believe convenience stores have friendly and welcoming staff. The figure is only 47 per cent in the UK.

Friendly staff is one of the most important factors in shopper appeal. Never forget that we all operate in a ‘people industry’, with local shoppers often being served by local staff. People buy from people they like. Word- of-mouth recommendations remain the best kind of marketing in terms of effectiveness.

One of the challenges for convenience stores around the world is to make the sector an attractive and appealing place to work. This can only be done by continuing to improve the opportunities for those working in the sector, for them to see that it is more than ‘just a job’.

Profit-sharing is rare, but when it does happen, the results can be remarkable. Training and development are also important in making the whole sector seem more professional.

In summary, 2016 promises to be a year of great opportunity along with a few challenges.

The businesses that are willing to stride out, take a few risks, be willing to be a little different, give back to their staff, delight their customers and have a first- class retail offer will grab the attention over the next 12 months.

I wish you all a wonderfully prosperous 2016 and look forward to seeing the Australian convenience industry continue to grow significantly above the rate of inflation and take the fight to supermarkets and food- to-go chains. There is plenty of headroom for growth. Who’s going to grab the opportunity? 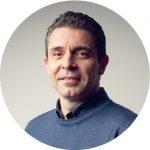 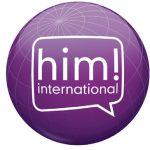