Store openings up in past 12 months, but closures continue

GapMaps, a cloud-based location intelligence platform, has released its annual ‘Fast Food & Quick Service Restaurant’ (QSR) report, which provides valuable insights on the number of store openings and closures in Australia for the year ending 30 June.

Tracking 28 brands in 6734 locations, the report shows 275 stores opened and 118 stores closed across the 12-month period.

“In the reporting period we saw strong overall growth with a net increase of 157 new stores after taking into account openings and closures we’ve observed over the past 12 months,” says GapMaps Senior Analyst Scott Johnson. 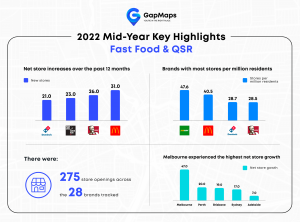 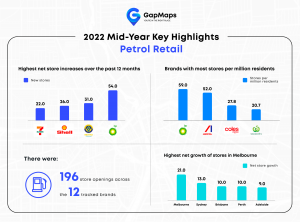 “Each of our reports provide brands with unique insights and key trends into the changing competitor landscape in their respective retail sectors,” Mr Johnson said.

“Our ability to use a range of data points to represent the most up-to-date view of physical network locations is helping brands make better location decisions at a time when new working arrangements, such as hybrid, is having an impact on population habits and movements.”

The Aussie Pie Council is inviting bakers, pastry cooks, apprentices, and baking businesses to enter their pies and sausage rolls in the baking industry’s...

The cost-of-living crisis is having a major impact on families already experiencing disadvantage and causing worrying disruptions to children’s education, according to The Smith...
Advertisment