MTV Up! to reconnect music-lovers, fun-seekers and creatives

New energy drink MTV Up! is now available in over 1500 Dan Murphy’s and BWS stores nationwide, after signing a deal with Woolworths Group. 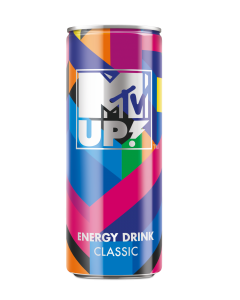 Wrapped in what is described as a “wildly colourful” can, the energy drink is marketed as an ideal mixer for vodka, gin, white or spiced rum and can be used to create cocktails. MTV Up! is also said to be “delicious” on its own, as a “tasty energy boost”.

MTV Up! made its debut in Australia last September. Launched in Victoria, the product has achieved “strong” sales performance across some of Australia’s largest service stations and bottle shops, including BP, United, Thirsty Camel, and Cellarbrations.

MTV Up!, according to the brand, is designed to inspire creativity and boost potential, encouraging Aussie millennials to enjoy life, have fun, discover music and live to their full potential.

While the current major energy drink players in Australia focus heavily on sports, performance, and high-octane activities, MTV Up! has positioned itself in a different audience segment. The new energy drink has identified a gap in the market that services millennials who are passionate about music, travel, fashion and seeking new experiences.

“The new brand aims to reconnect Aussie music-lovers, fun-seekers and creatives with a taste of one of the hottest global brands they know and love, inspiring passion, freedom, and creativity in the process,” says the company in a statement.

“Having grown up watching and listening to MTV, the new drink provides Aussie millennials with the chance to finally taste it, at a time where pop culture is experiencing a resurgence of 90s nostalgia.”

MTV Up! says it has a “bold vision” and “innovative collaborations” in the pipeline, with the message to music lovers, travel enthusiasts, partygoers and creatives to ‘Raise Yourself’.