Melbourne to be treated with a Maxibon drive-through

For one weekend only, Maxibon is taking over the Saul’s Sandwiches drive-through site on Kings Way in Melbourne, replacing regular sandwiches for Maxibon sandwiches.

Locals can visit the drive-through and get their hands on the new Waffle On between 12 and 14 August.

“There are thousands of free Maxibon Waffle On Bons to give away, as well as exclusive Maxibon merch for those who are first in the queue!” says the ice cream brand.

The Maxibon Waffle On drive-through will be open at 264 Kings Way, South Melbourne during the following hours: 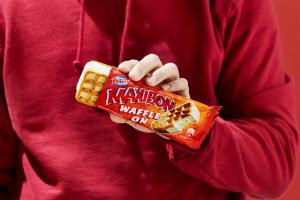 Jammed in between is Maxibon’s “signature” sweet vanilla slab, full of caramelised sugar pieces to give the “perfect amount of crunch while delivering big on flavour, with every bite”.

Maxibon Waffle On is available at all major supermarkets and convenience stores, in packs of four (RRP $9) and single serves (RRP $4.50).

The Aussie Pie Council is inviting bakers, pastry cooks, apprentices, and baking businesses to enter their pies and sausage rolls in the baking industry’s...

The cost-of-living crisis is having a major impact on families already experiencing disadvantage and causing worrying disruptions to children’s education, according to The Smith...
Advertisment