Eveready asks parents ‘what if toys could talk?’

Eveready has teamed up with Niche Marketing Group to launch its ‘If toys could talk’ campaign to help raise awareness about battery and toy care. 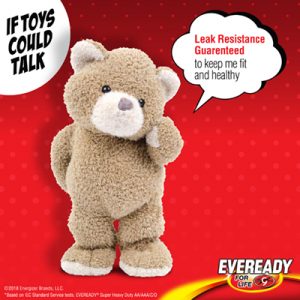 The campaign, described as encompassing unique elements across POS, social media, influencer marketing and traditional PR, will run until the end of June.

According to the National Environment Protection Council Service Corporation, the number of batteries sold specifically for children’s toys in Australia has consistently increased year on year since 2012 and is predicted to exceed 99 million in 2019, reflecting the popularity of battery-operated toys (‘Study into market share and stocks and flows of handheld batteries in Australia’, 2014).

Australian Toy Association Executive Manager Gabby Anderson was consulted for the ‘If toys could talk’ campaign. Her advice included that, when looking for a battery for toys, it’s important to find quality batteries that will ensure the toy remains ‘fit and healthy’ for as long possible.

“Although it can be tempting to go for a cheaper option when powering your children’s toys, especially when the toy itself can already be so expensive, it’s even more important to choose a quality brand you can trust that won’t leak,” she said.

About 1,500 bespoke interactive POS units have been installed across various retailers, including BIG W, Woolworths, Officeworks, The Reject Shop, and Metcash, enabling families to push a button while shopping to hear what different toys might say if they could talk.

The POS creative will be echoed in a dedicated social-media campaign – Eveready’s first since 2016. The company has also created bespoke, branded ‘peek-a-boo bears’ – which it says are a core part of the influencer marketing aspect of the campaign.