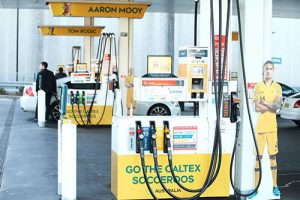 Caltex Australia has honoured Socceroos star Tim Cahill by renaming five of its marquee sites across the country ‘Cahilltex’.

As well as being renamed, each site has received a full makeover and will remain as Cahilltex throughout May and June.

Football Federation Australia CEO David Gallop unveiled Sydney’s Cahilltex site at  North Ryde in Sydney on Tuesday (May 15) alongside Jackson Irvine and Josh Brillante, who, with Tim Cahill, are members of the Socceroos squad for the 2018 FIFA World Cup finals in Russia (June 14-July 15).

“For Caltex to rename itself in my honour is truly humbling,” Mr Cahill said. “There is no greater motivation heading into the biggest competition in our sport – let alone the world – than having an all-Aussie company and the rest of the country right behind the squad.

“I’m lucky to have had several defining moments across previous FIFA World Cup campaigns and I’m looking forward to giving it another crack in Russia this year.”

Caltex Australia Executive General Manager Convenience Retail Richard Pearson said: “Transforming into Cahilltex for a couple of months shows our ongoing support for the Caltex Socceroos. These sites are just one of the ways we will celebrate our new partnership with Australia’s greatest ever footballer, Tim Cahill.”

In addition to its new look, Caltex says it will continue to fuel Australian support of the Socceroos through its ‘Fansie’ – an exclusive 2018 Socceroos-branded onesie – so not only can fans fill up at Cahilltex sites, they can also wear the Fansie while watching the World Cup.

Cahilltex tribute sites, apart from the North Ryde location in Sydney, are at South Melbourne, Belmont in Perth, Clearview in Adelaide and Southport on the Gold Coast.

New figures show Australia’s food and grocery manufacturing industry increased its value to $$133.6 billion in 2020/21. The increase came as companies weathered the...

Australians are forecast to spend $735 million on Father’s Day gifts, according to new research. Purchases are, however, down 7.7% on last year’s projections,...
Advertisment