Australia Post has welcomed the first of 20 electric trucks to its national delivery fleet. 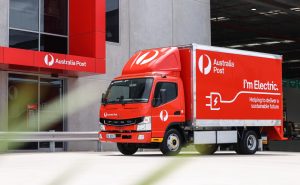 The company now has three Fuso eCanters delivering parcels to customers in Melbourne ahead of Christmas.

Australia Post General Manager Networks James Dixon says the addition of the Fuso eCanter to the company’s delivery fleet is an exciting step for the organisation.

“We’re very proud to be Australia’s largest electric fleet operator, but up until this point, our electric fleet has consisted solely of smaller delivery vehicles that are used for the last-mile,” he says.

“We’ve trialled a range of electric trucks previously, but the Fuso eCanter is the first we’ve found that suits both Australian conditions and our unique operational needs.”

Australia Post Chief Sustainability Officer Susan Mizrahi says expanding the current electric fleet is an important part of the Australia Post’s 2020-22 Corporate Responsibility plan and its science-based target to reduce emission by 15% by 2025.

“This is an important milestone for our business,” she says.

“We know that every delivery has a carbon footprint which is why we’re committed to reducing our emissions through growing our electric fleet and increasing our renewable energy production to help power these new vehicles.”

The Fuso eCanter is claimed to be the only original equipment manufacturer electric truck available in Australia. It uses the latest technology from the Daimler Truck group.

The remaining 17 eCanters will hit the streets delivering in major capital cities from early 2022.