Off the back of the Nutri-Grain x OAK Plus and Coco Pops x Golden Gaytime collaborations, the team from Kellogg’s are at it again in 2022.

“Nutri-Grain is one of Australia’s favourite breakfast cereals, and we’ve brought together the malty-crunch Aussie’s know and love and combined it with Bega Peanut Butter flavour & crunchy peanut pieces to bring Aussies something new, that up until now they could have only ever dreamed about.”

Bega Marketing Manager, Spreads Jacqui Roth says: “We’re thrilled to be teaming up with Nutri-Grain. We can’t think of a butter brand to partner with as Bega Peanut Butter makes its debut in the cereal aisle.” 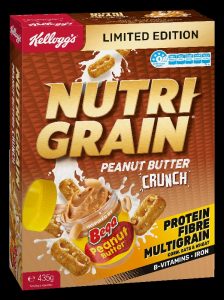 Tesco has created Better Baskets, a campaign that aims to tackle the barriers that customers come up against when looking to fill their basket...

Metcash Limited has extended the term of its agreement to supply Drakes Supermarkets stores in Queensland for a further five years, according to a...
Advertisment